It wasn't leaving our eight-year-old son at camp that was the worst for my wife and I (although that was bad enough itself). It wasn't getting the perfunctory hug telling us "Get going and let me have fun," instead of a great big bear hug to let us know he'd miss us almost as much as we'd miss him. Oh, no, it wasn't all that. What really got both of us yesterday afternoon after leaving Camp AZDA was THIS: 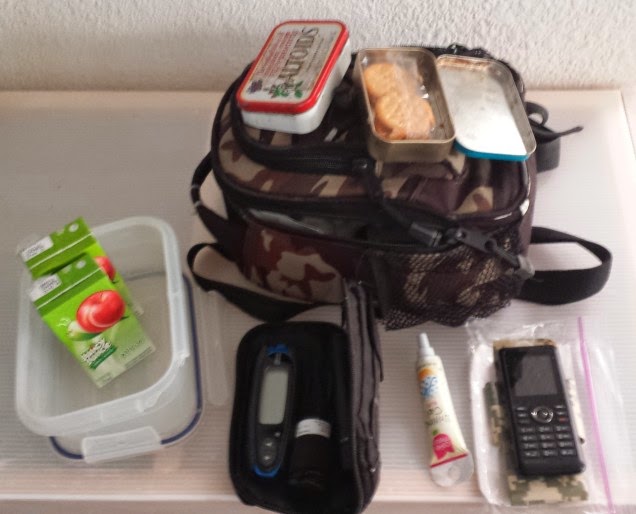 THIS is Andrew's "camo pack" as we call it, the small backpack he's taken EVERYWHERE with him for the past three years. This is his daily supply & emergency pack, which contains juice boxes and peanut butter crackers (protected in Altoids tins to keep from getting crushed) to treat low blood sugars, a few tubes of cake icing in case of a SERIOUS low, an emergency phone with instructions (since he's been riding the school bus), and his usual blood sugar tester with test strips, alcohol swabs and cotton balls he uses up to ten times a day. In short, this pack is his lifeline, whenever he's out of the house, no matter where he is.

So why do WE have it while he's at camp for a week?

Because we were told, when bringing Andrew to camp, to bring (besides clothing & other essentials needed at any camp) his medical records, supplies for his insulin pump infusion sets (the part that connects the pump to his body), and THAT'S ALL. Don't bring blood sugar testers or strips, don't bring finger prickers, don't bring insulin or Glucagon kits or glucose tabs or snacks or juice boxes or ANYTHING, as they would provide everything the campers will need for the week. We saw the tub full of all manner of supplies in the cabin ourselves for the eight boys living there - it was awesome and eased our minds...at the time...maybe a little.

Trust me, we appreciate the generosity of the drug companies, pharmacies and other businesses involved in supplying the camp. We know Andrew is surrounded by doctors and nurses and counselors who have all volunteered to make this camp a reality, and is probably safer there than anywhere else besides home and the hospital.

But it was still extremely disconcerting to see that backpack sitting in the van on the way home, and knowing we'd just left him somewhere without it for the first time in three years.

We'll get over it. Eventually. Really.